Murmansk and Arkhangelsk are Nothern Russian cities, located in Polar region. They are famous for their frosty and snowy winter and Nothern Lights (Aurora Borealis). Many people travel theere for the so-called ‘Nothern lights hunting’. And also theses two cities and their suburbs are very good and atractive places to engoy real Russian winter with its exiting winter activities.
Murmansk is rather yourng Russian city, that was founded in 1916. The city of Murmansk is also called “The Gates of the Arctic“. It is the largest ice-free port in the Arctic region with a nuclear-powered ice-breaker fleet consisting of 8 ice-breakers. They have plowed all over the Arctic more than once, having been to the very top of the Earth. The coastal infrastructure of Murmansk, including shipyards, is the closest rear of the Northern Navy. And exactly from this city many Russian and foreign travelers start their journey to the North Pole.
Arkhangelsk is much more older than Murmansk. This nothern city was founded by the order of Russian Tsar Ivan the Terrible in 1584. The city is spread out on the both sides of the Northern Dvina River, as well as on the islands of its delta. Arkhangelsk is the largest seaport in the north of Russian Federation. It is also a cultural capital of Pomorie region, the place where the traditions of the Russian North have been kept. You should visit Arkhangelsk to admire the unique nature of this outstanding region and wonderful ancient architecture of the city. And, of course, you must see such wonders as Malye Korely and Kenozersky Park. 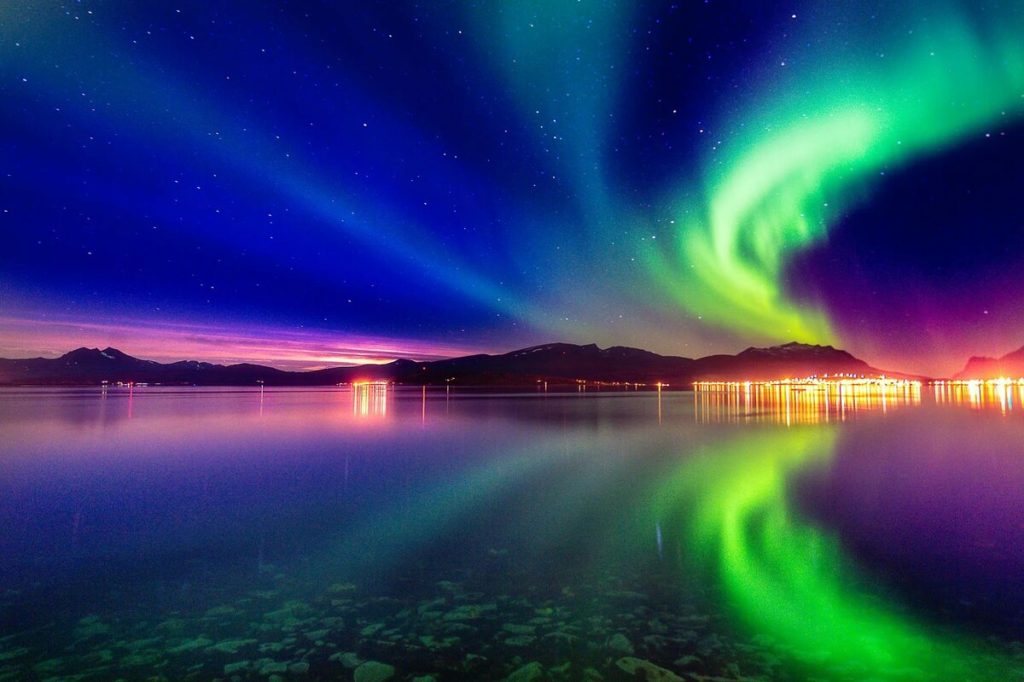 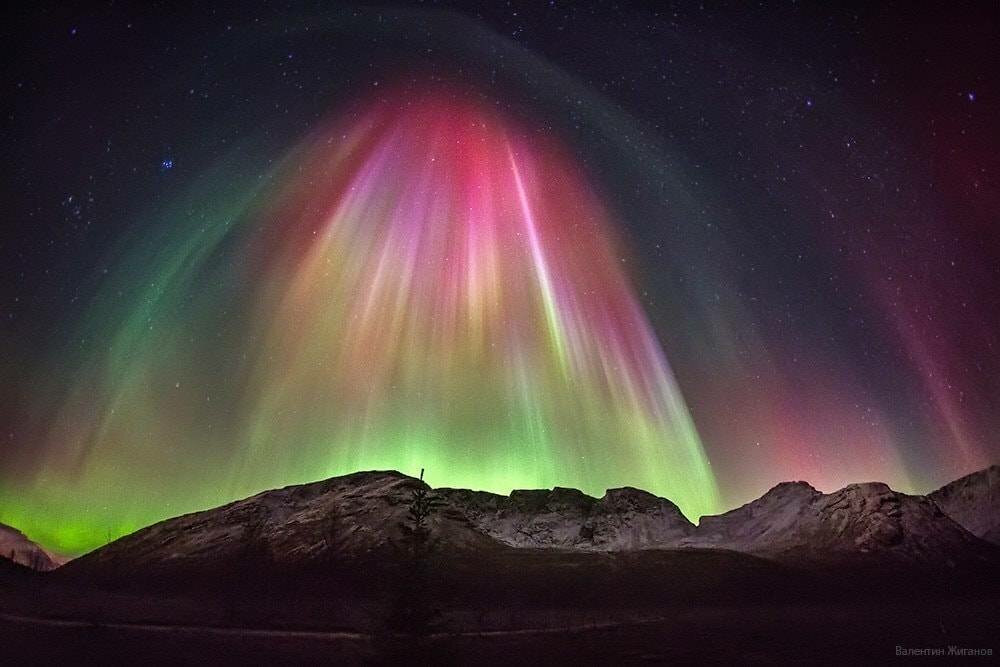 During the City tour in Murmansk you will be shown the most interesting places connected with the history of the city and actions of some eminent Nothern heroes. You will also learn some stories of exploring North as from this city began the great research expeditions of the most northern region of our planet. You will see the Five Corner Square (the main square of the city) and walk along the Lenin’s Avenue (Prospect Lenina) – main street of Murmansk. You will also visit the Ice-breaker “LENIN” (ship-museum), that was the first nuclear-powered ice-breker in the world.

You will also see some most important cathedrals – the St. Nicolas Cathedral, the Naval Cathedral of the Saviour on the Waters, the Church of All Saints. During the tour you will admire the magnificent views of the Kola Bay and also will be shown the famous Kolskiy Bridge (Kola Bridge). It is a rather large bridge that is of 1611 meters long, and together with access roads has got the length of 2500 meters. Its construction took about 12 years. The importance of Kola Bridge is that it connects Murmansk with the western part of the Murmansk region, as well as with Finland and Norway.

As Murmansk is a port and city of sailors, there are many monuments and memorials connected with civil and military sailors – Memorial to the Sailors Fallen in the Peaceful Time, Memorial Stella ‘To the Heroes of the North Sea who died during the Great Patriotic War‘ (it has got the form of ‘arrow‘), Memorial Sign to the Ice-breaker “Yermak”, the monument “The Waiting Woman” (this sculpture was created to honor all the mothers, sisters, wives and daughters of military sailors and fishermen; and it is one of the major symbols of Murmansk city).

Also you will be able to see some monuments connected with World War II – the Monument to the Border Guards of the Arctic (that symbolizes the northern cliffs on which rises the legendary border pillar – the sign of the Russian-Finnish border, which the fascist troops could not overcome – surrounded of different Russian border guards), the Monument to Alyosha (that is the memorial to the defenders of the Soviet Polar Region) and etc. If you are interested in the history and memorials of the events of the World war II, that took place in Murmansk region we can also offer you to make a trip to the Valley of Glory, situated in the suburbs of Murmansk. For active travellers and lovers of the extreme tourism we can suggest some ACTIVE WINTER TOURS in Murmansk area. Among these intercative tours we can offer you ice-fishing, snowmobile riding, tour to ‘Ogni Imandri’ Park and ethnic Saami Village (with its famous ‘Saami Chum‘ – traditional house of Saami people) with reindeer sledding, tour to the Husky Park and Saami village (with Husky dog sledding). 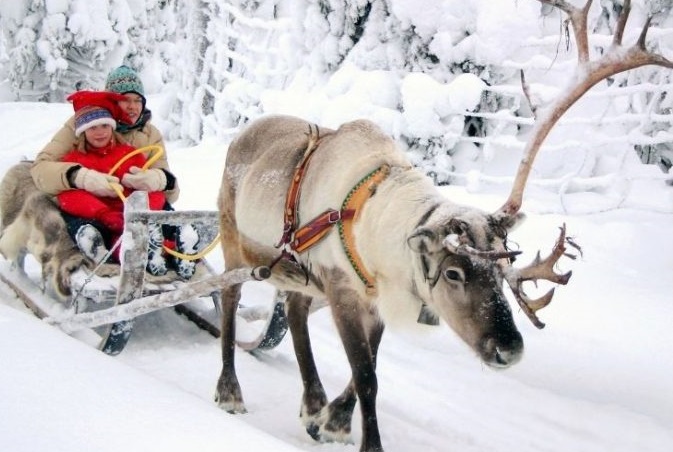 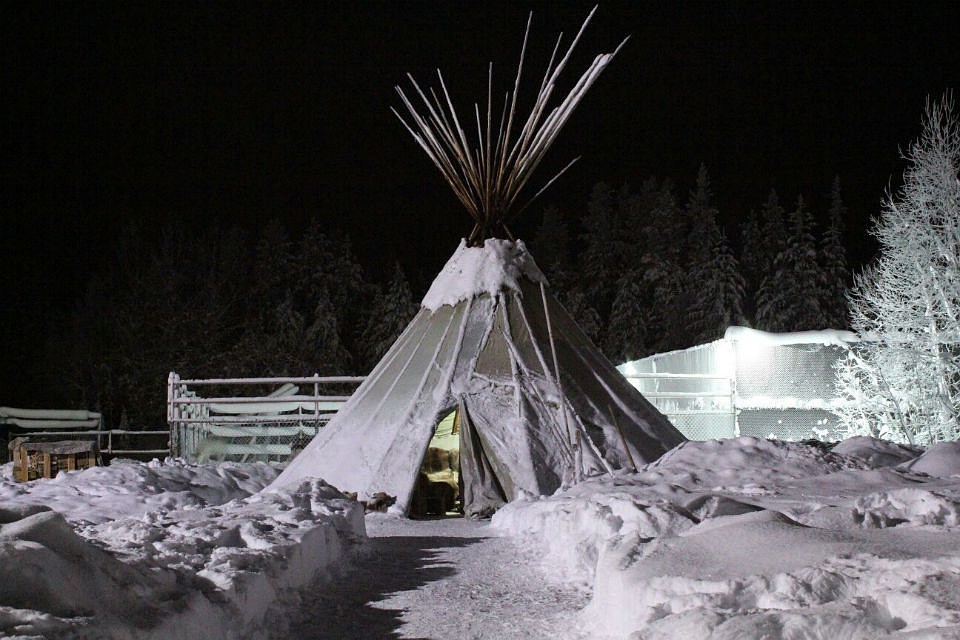 During the City tour in Arkhangelsk you will see the most remarkable and historical places of the city: Gostiny Dvor (‘Merchant Yard’) and St. Catherine’s Lutheran Church, monument to Peter the Great and statue to the eminent Russian scientist Mikhail Lomonosov, the Arctic Institute, the Statue of Seal and others. You will have a guided walk along the Embankment of North Dvina river and Chumbarov-Luchinsky Avenue (a pedestrian street-museum with its funny statues to Senya Malina and Kozma Prutkov, where the ancient wooden

houses and examples of buildings of XIX-XX centuries have been collected). You will also see the memorials devoted to the Great Patriotic War (World War II) – the Obelisk of the North, a Monument “To Brave Defenders of the Soviet North”, Stella “City of Military Glory”. During this tour the guide will show you the combined Sea-and-River Passenger Terminal (that is depicted on a current 500-Rouble note), the Red Pier (from where started the famous expedition of Otto Schmidth, dedicated to discovering the Northern Sea ways)

and the Solombala Island, where you can admire different ancient churches. You will also learn about the historical inhabitants of these lands – the Coast-Dwellers (‘Pomory’), who came to these costs by sea in their small sailing ships in X-XI centuries. Yow will know about the northern expeditions of Russian researchers and scientists such as Georgy Brusilov, Vladimir Rusanov and Georgy Sedov. It is also possible additionally visit the Sea Museum of Arkhangelsk. You will also see and optionally visit some most remarkable churches and cathedrals – the St. Nicolas Church, the Assumption Cathedral,

the Holy Trinity Church, the Cathedral of the Archangel Mikhail. Besides the city tour we can also suggest you the exiting excursion to Malye Korely – a unique open-air museum, which presents the collection of local wooden architecture. On an area of about 140 hectares about 120 various buildings of ethnographic significance are concentrated – different churches, chapels, bell towers, peasant’s houses and dwellings, seasonal settlements, mills, barns – built in the XVI-XIX centuries. All these

buildings and constructions reflect the peculiarities of original culture and traditions of the Pomor people of the Russian North. Another significant place for tour visit is the Kenozersky Park – a national park not far from Arkhangelsk, that has a status of UNESCO Biosphere Reserve. This park is famous for its lakes. Its main lake is the Kenozero, that gave name to the park, and also is attactive because of its unique wooden churches whose ceilings are decorated with

colorful paintings of saints. The park contains natural as well as cultural monuments and is focused on the ecotourism. Several trails have been opened in the park. There are also different wooden architectural monuments of past centuries on its territory. And, of course, we can offer you distinctive WINTER ACTIVE TOURS that are now very popular among Russian and foreign tourists such as cross-country skiing tour, snowmobile safari on the White Sea ice and etc. 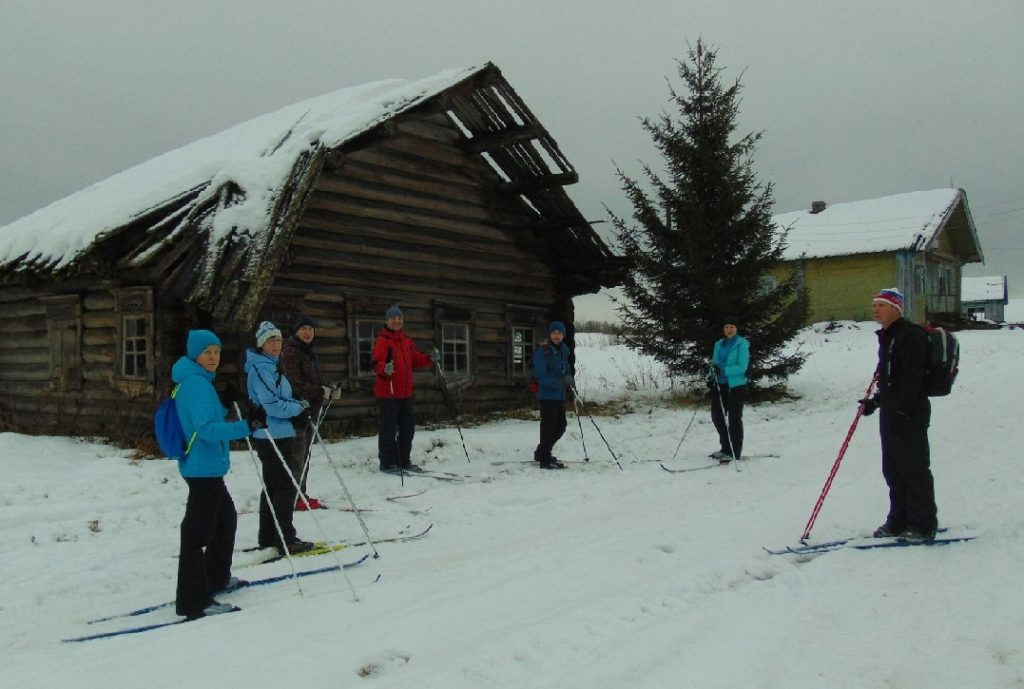 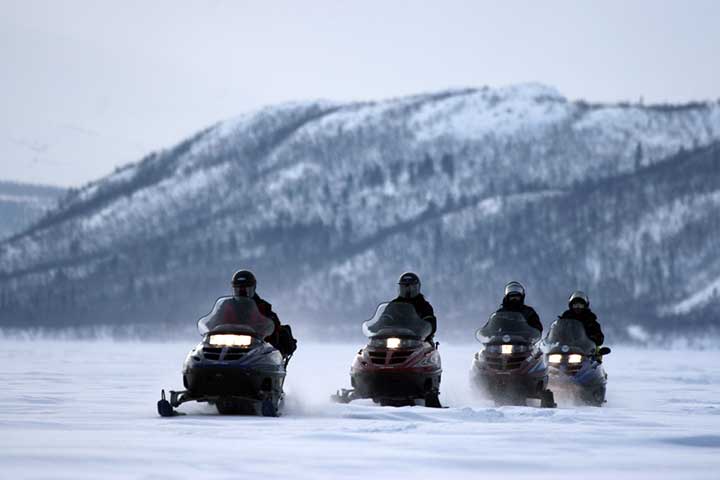 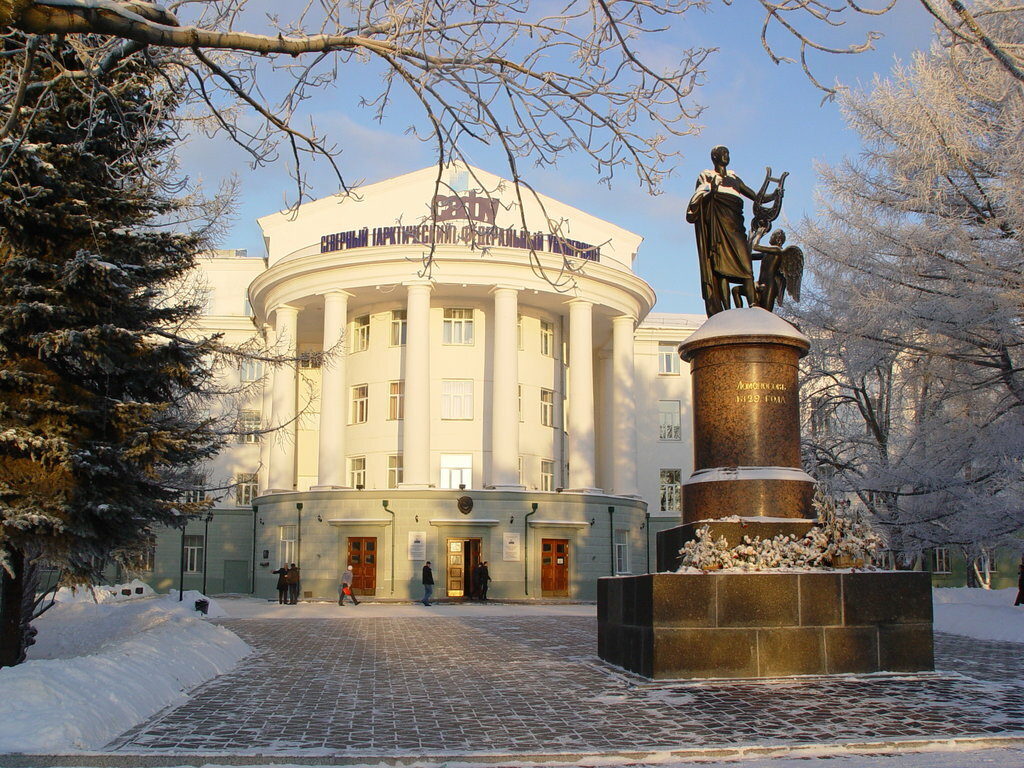 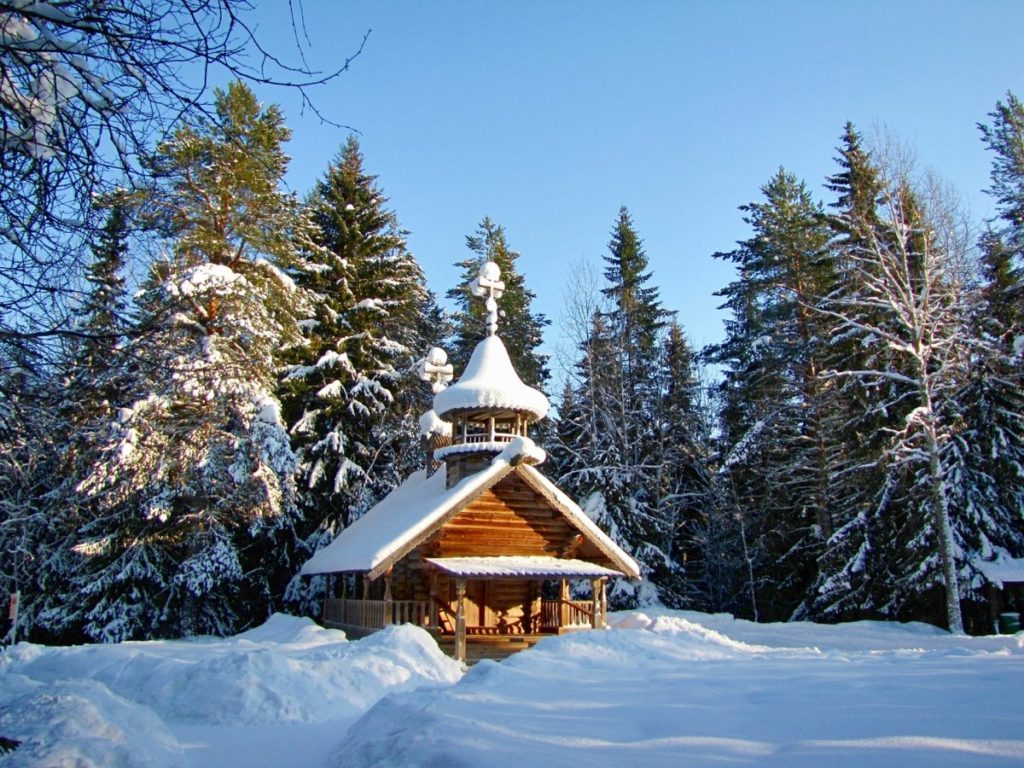