Nizhniy Novgorod is a administrative center of Nizhegorod region. It was called Gorkiy in Soviet times (in honour of the Russian and Soviet writer Maksim Gorkiy). The city of Nizhniy Novgorod is situated at the confluence of the Oka and Volga rivers, about 420 km away from Moscow. It was founded in 1221 by Prince of Vladimir – Yury Vsevolodovich.
The city of Nizhniy Novgorod had a strategic location on the route from the Baltic to Central Asia through the river Oka to the Vladimir and Moscow regions and then via the Kama river to the Urals and Siberia. In the end of XIV century Nizhniy Novgorod was incorporated in the Principality of Moscow and then became a citadel against the Volga Tatars. From there Russian tsars Ivan III the Great and then Ivan IV the Trerrible launched their expiditions against Kazan (the capital of Tatars). The conquest of the Volga by Russia in the middle of XVI century increased the trade for Nizhniy Novgorod and brought the economic development to this city.
Modern Nizhniy Novgorod is one of the largest Russian cities. It is a city of Gorky Automobile Plant (GAZ – Gorkovskiy Avtomobilniy Zavod) – one of the largest automobile plants in Russia, that besides the cars also produces different types of river craft and ships, diesel engines, machine tools and machinery. Moreover nowadays Nizhniy Novgorod is the center of production of many chemical and consumer goods.

We can offer you the city tour in Nizhniy Novgorod you will visit its historical city center and see its main sights: the Kremlin, Cathedral of the Archangel Michael, the Minin and Pozharskiy Square, Chkalov staircase, Stroganov (Nativity) Church, Bolshaya Pokrovskaya and Rozhdestvenskaya streets and some other important places and monuments. You will definitely walk along the Upper Volga Embankment and visit the spot of the confluence of the Oka and Volga rivers, offering extraordinary views of the Volga expanses. You can

also have a nice stroll in the Alexandrovsky Park, that is an Eglish style park located close to the Kremlin, and visit the Victory Park, devoted to the heroes of the Great Patriotic War and the victory in World War II. The Nizhegorod Kremlin was the vastest fortress in the Medieval Russia. It was one of the great fortifications in the XVI century. Its construction lasted about 15 years. The thickness of the Kremlin’s walls reaches 5 meters, and their height ranges from 12 to 20 meters. The height of its towers also varies from 18 up to 30 meters. In

the beginning of the XIX century on the territory of the Kremlin’s was created a courtyard for celebration of festivities. Besides this you can also visit the Annunciation Monastery and Pecherskiy Acsention Monastery – two very ancient monasteries of Nizniy Novgodorod and Volga river region, founded in XIII-XIV centuries. We can also suggest you to visit another part of Nizhniy Novgorod accross the Kanavinskiy Bridge. There you can visit the Nizhegorodskaya Fair. This fair was of great importance in local and foreign trade. The

Nizhegorodskaya fair has been the most important fair in Russia since 1552. In 1751 the Russian Emperor Alexander II sent 6,000,000 of gold roubles for the construction of new stone exhibition halls instead of original wooden buildings. This fact confirms that this fair was greatly important in the life of country. The Nizhegorodskaya Fair consisted of the Shopping arcade (containing about 60 buildings) and other 40 stone buildings for different purposes. Close to the fair you will see the Spassky Cathedral, that was is one of the few buildings,

preserved until nowadays, and that was built together with the stone fair arcade on an artificial peninsula. The fair’s development resulted in rapid construction of various entertaning centers, circuses and theatres in the city. Another interesting tourist attaction is the famous Nizhniy Novgorod Cableway. By using these cable cars you can travel accross and over the Volga river to the town of Bor. So, this cableway trip can give you the great opportunity not only to visit Bor (old Russian town famous for its beautiful pinery), but also enjoy the picturesque panoramic views of the river Volga and its banks with monasteries and other beautiful sights. 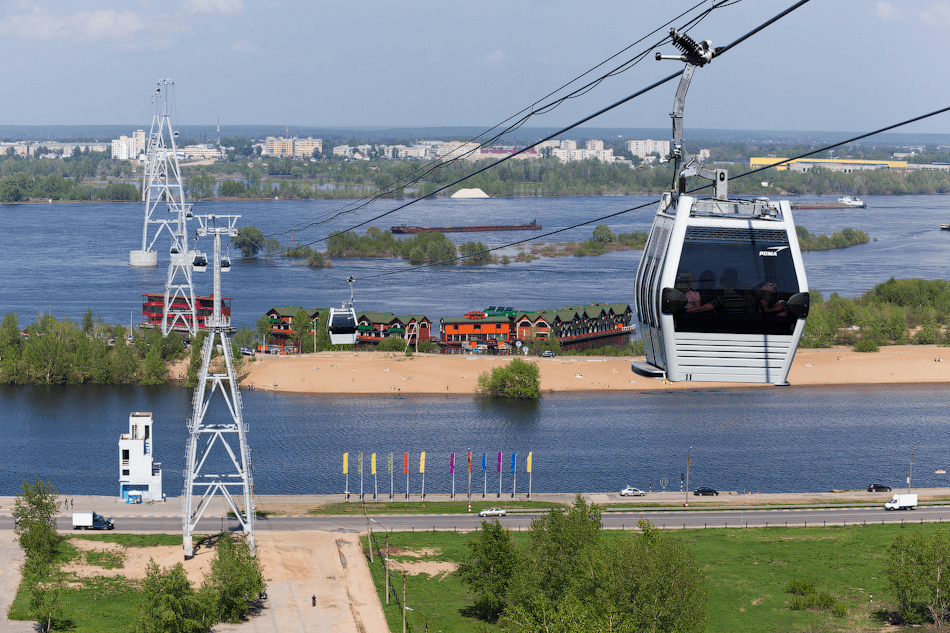 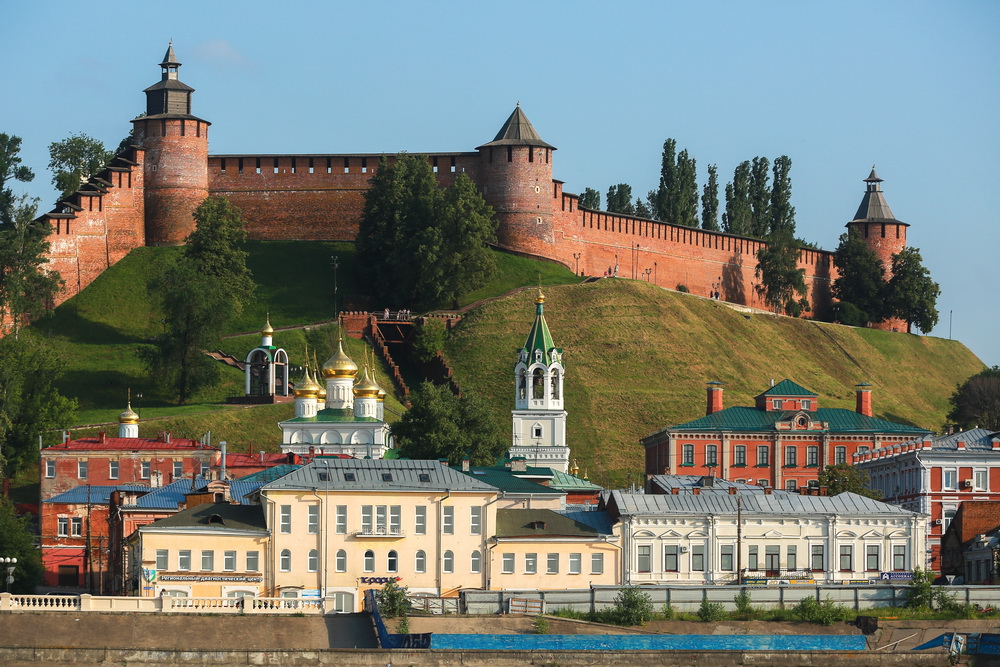 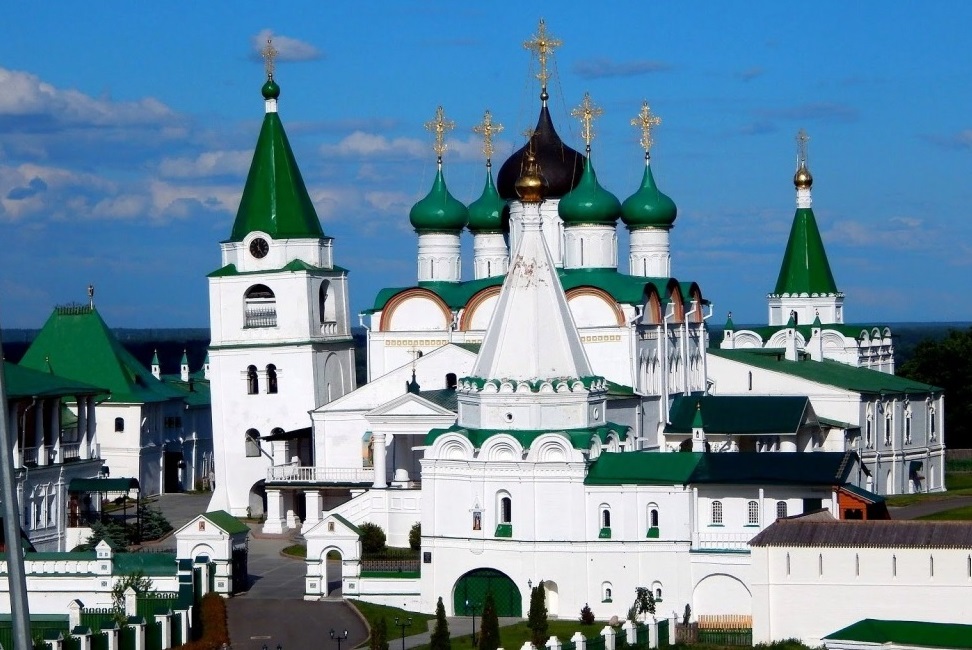 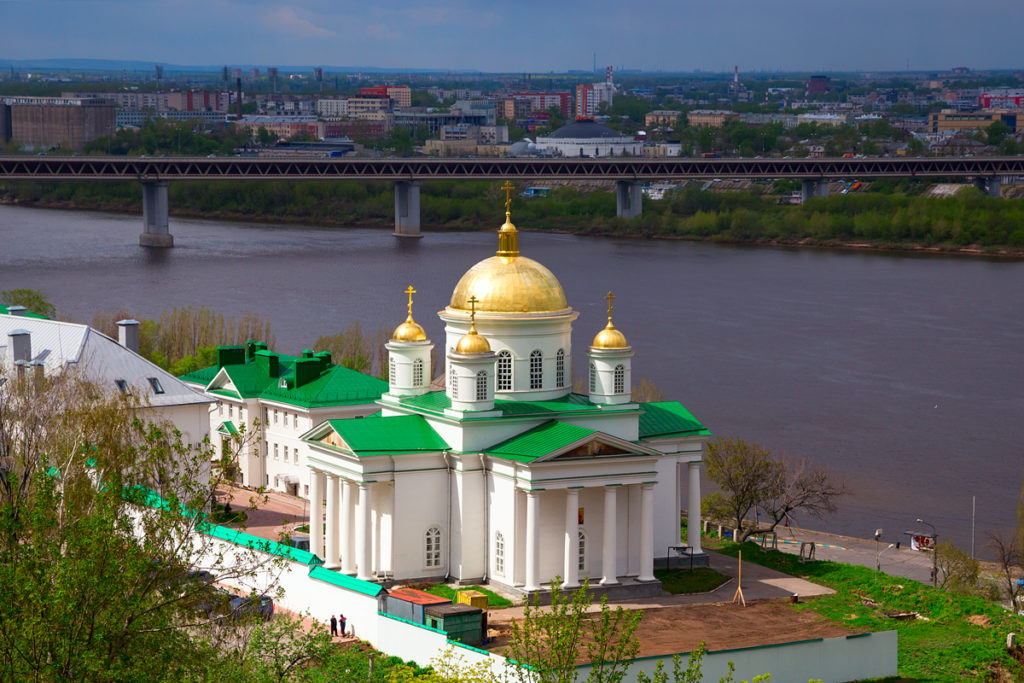